Last month we got a little note sent home in Jaxson’s lunchbox. It was a note telling us that he had upcoming school photos. Immediately I got excited. His very first school photos! Of course we have more than enough nice pictures of him, the perks of having a mommarazzi. But there’s something about school photos that I will totally get sucked into buying.

A few days before his scheduled photos I started thinking about what he was going to wear. Should he go all preppy in a collared shirt or should he go as ‘cool kid’ in a rad shirt and ripped jeans? I consulted friends and the consensus was preppy.

That morning I sent him to school in a nice crisp outfit. Lots of spare jeans in case he had an accident before the photos. I told him that he was going to get his picture taken today not by mommy and to give his best smile ever.

I picked him up later that day. One of his teachers told me he gave them all a run for their money. Apparently the photographers had a nice set with an old desk, with books, and pencils on top. I didn’t need to hear more to know exactly what that scene looked like. lol! I knew those books, pencils and his glasses were going to be tossed all over the place. But when I saw who the photographers were I breathed a sigh of relief. Knowing that on of the photographers has a nephew with Down syndrome I knew that they would have had extra patience with Jax.

A week or so went by and I was excited to see the uploaded school photos. I logged in to the photographers website and eagerly scrolled through the kids. Oh all the pictures were GORGEOUS!! Those cute little smiling faces. They all looked SO good. Then I got to Jaxson’s folder…..

Initially I laughed, hard! Alex came to look at his photos and laughed harder with each picture we flipped through. But as quickly as they made me chuckle my heart started to sink. A very sad feeling washed over me. I couldn’t help but wonder what the other parents were thinking when they scrolled passed Jaxson’s photo.

Then it hit me that this is just the beginning. This is only the beginning of wrongful stereotypes (not that it even happened in the first place). Even if no one thought it this time, we have a whole life ahead of us.

This is why we do do what we do. This is why we share Jaxson with the world. I want everyone when they look at these photos to see a moody little 3 year old who’s having a rough day. A 3 year old who wants nothing to do with his school photos. A stubborn little boy that is refusing to smile at all costs. When I say at all costs I mean it. The photographer later told me that they were singing and dancing to Moana for him AND they even brought out a PUPPY. A freaking puppy folks!! And this was his reaction. 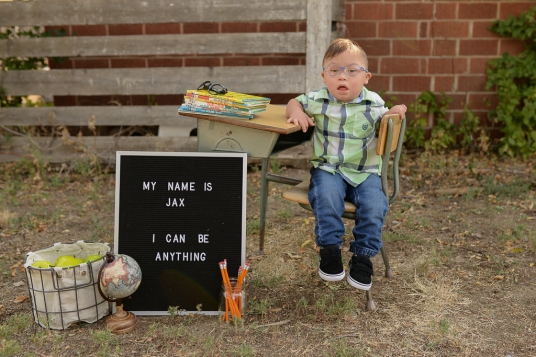 Thank you Megan and Kari from MeKa Studios for taking the most amazing pictures of the kids. They all looks so good!  And thank you for trying so hard to get something out of this stubborn little boy! Maybe next year he will flash you guys something to work with, hahaha.