Some pretty incredible things have happened since Jaxson turned 2. It has honestly been the strangest thing ever. The first thing he did we joked that he knows he’s now a 2 year old and it’s time to do it. Then another thing happened, and another! It’s like this kid got the memo that he’s a little boy.

1: The first thing he did is by far the biggest. I hate that I am going to put this into words, and probably jinx the whole thing but I just can’t keep it in any longer! Jaxson has had some pretty big feeding issues since we started solids. Long story short, he will put EVERYTHING in his mouth, chew it, chew some more, get it to the point of swallowing, then he pushes it all to the front of his mouth and spits it out. Every single meal we put out solids (a whole variety) on his tray for him to ‘eat’. Every single meal he chews and spits his solids. Then when he’s ‘done’ we feed him a puree. You can imagine how frustrating it is to have your child chew and spit everything out EVERY.SINGLE.MEAL! Not to mention having to feed your 2 year old purees is a total pain in the ass. It got to the point where we had to have a feeding assessment done to see if there was a legitimate problem keeping him from swallowing (there’s not). Anyways, I sh!t you not he has CHEWED AND SWALLOWED everything since sunday!!! This is HUGE for him. Every meal we are still in shock of what he is doing. Now I have totally jinxed his eating…. lol

2: Monday morning he had physical therapy, which he just loves (sense the overwhelming sarcasm!?). Every PT session his therapist tries to get him on one of those blow up bouncy horses. He flat out refuses. He wiggles, turns, and dives to get off of it. He wants non of that horse (we have one at home and he does the same). Again, I sh!t you not, he not only sat on that dang horse, but he BOUNCED on it. Holding the ears, feet flat on the ground, no one holding him to help balance, and jumped up and down!

3: Jaxson learned a new sign about 3 weeks ago ‘please’. When he learns a new sign he stores all of his other signs away and gets stuck on the new one for a couple weeks. Today all of his signs came back (yes, every single one came back today. Funny how that works). Thats not the big news though. Today he strung 2 signs together!! Alex asked him if he wanted water, Jaxson looked at her and signed ‘water please’! All on his own with no prompting to say the 2 words! 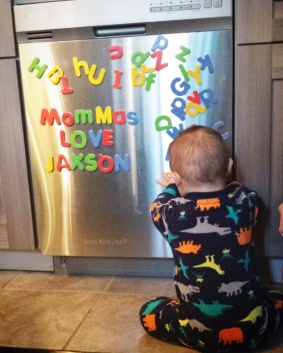 So I guess our 2 year old got the memo that he is a little boy, and we couldn’t be more proud of the coincidental leaps and skills he is learning!