What is normal anyways? Normal is subjective. Whatever you fill your own little world with is your normal or typical, which is probably very abnormal and weird to the next person.  I’m sure it comes as no surprise that part of our normal is Down syndrome.

Since Down syndrome is A PART of our first and so far our only child, it is what we know as normal. Much of our little world is filled with Ds. Social media feeds flooded with Ds blogs, articles and pictures of my friends insanely cute kiddos with their almond eyes, and giant grins. Weekly therapy. Delayed development. Low muscle tone. Ear tubes. Sign language. Sleep studies. Surgery. Doctors appointments. ‘Therapy’ toys. HUGE celebrations for seemingly little hit milestones. The list goes on and on. Our little world revolves around Down syndrome in some way or another. It’s no wonder that Down syndrome is OUR normal!

Down syndrome is so normal to us that once I even forgot Jaxson has Down syndrome! True story!

Earlier this summer I was holding my friends little guy who is 6 months younger than Jax. I couldn’t figure out why he was so damn stiff. To me it felt like I was holding a 2×4 and I couldn’t figure out why this kid wouldn’t relax! A few weeks later I was holding another friends little guy who is only a few months old. Again I couldn’t help but wonder what was wrong with him. This baby too was stiff as a board. I thought to myself as I was rocking with him “man, chill out buddy. Relax……..”. It wasn’t until a few days later that it clicked for me. Those babies are ‘normal’ (or typical as we like to say in the disability community)!! Seriously, I felt so stupid that it took literally a month to figure it out. Jaxson has Down syndrome! Jaxson has low muscle tone which means he’s ‘floppy’. Holding Jaxson is like holding a 30lb snuggle bug. He melts right into you. So relaxed, so ‘floppy’ and so snuggly (the best. thing. ever!). This is why those ‘typical’ babies were not normal to me.

I seriously forgot that Jax has Down syndrome! It’s strange how our world literally revolves around Ds that now it’s not even a thought. I have a feeling that Jaxson will always be our ‘typical’ or ‘normal’ child. Alex always says “what are we going to do with a stiff, non flexible baby? They are going to be so hard to dress, change and get into that awkward car seat.” 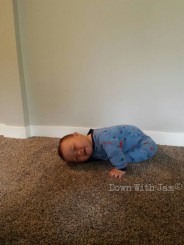 Down syndrome is our normal and I wouldn’t want i it any other way!

4 thoughts on “Our Normal”