So you may have noticed that it’s been quite a while since the last Down With Jax update. Almost 1 month! It’s been a crazy month, so here is what our family has been up to.

I have just got back to work after a glorious 21 days off. Thats right, 21 days! It was nice, it was a much needed ‘break’, it was refreshing and it was BUSY! For starters we moved….. moving sucks! For 2 people who despise moving as much as we do, we sure seem to do it a lot. This was our 5th move in 5 years!

The only way we can deal with the dreaded moves is to pack quick, move quick and unpack quick. We had all of the boxes unpacked within 2 days, and pictures were hung on the wall within 48 hours. So needless to say we have been settled in for a few weeks now and are very much in love with our new home!

Within a week of the move we had our first out of town visitors! Our dear friends from High Level came to visit us for a week. We had SO much fun catching up, doing some local sight seeing, and showing them the city their daughter will be living in for the next 4 years while she attends MHC!

A few short days after our first guests headed back north we had visitors from the east come stay with us. Alex’s Aunt Linda and cousin Paige from the Toronto area (because I call every city in that area ‘Toronto’) come stay with us for 5 days. We had a great time showing off our city and province. We figured since they came a long way to come see us, we may as well take them to the most beautiful part of our province…. the Rocky Mountains! We chose to take them to Banff. Yes we are those stupid people who decided Banff is a good idea in the summer, on a long weekend to boot! Yes, it was stupid busy with international tourists, but now they can say they’ve been to Banff. It is a big deal if you aren’t from the area 😛 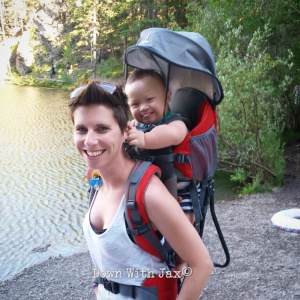 Of course we as a family have been insanely busy, but Jaxson has been busy himself! We recently decided that Jaxson would benefit greatly from more consistent, regular ‘therapy’ over and above what is covered through our health care system (which is great, but not nearly as much as we would like to see). So we hired a developmental aid (at least thats what I call her) who comes to our house on a weekly basis for an hour to work with Jaxson. The sessions are a cross between OT and PT. Together they work on many different skills through play. Jaxson responds SO well to her, and he has a great time while he’s learning. Let me tell you this already has been the best money we have spent yet. We have seen HUGE progress and gains over the last 6 weeks that we have been doing this. Having this weekly ‘therapy’ has also been awesome for Alex and myself. We learn different ways we can play with Jax to help him learn.

Here are some new skills Jaxson has perfected over the last 2 months:

For the longest time Jaxson would refuse to put any sort of weight on his legs. Who can blame him, he has a lot of chub to hold up! hahaha!! This video is a couple months old. He now loves to stand and his balance and stamina is getting better and better.

This one he figured out all on his own. Look at that technique!! Most babies with Down syndrome use this splits method for the transition to sitting because of their low tone. Therapists aren’t a huge fan of this technique for obvious reasons but hey, at least he’s doing it!

This is BIG for 2 reasons. The first reason is because up until recently he never really noticed music or was too interested in making noise while playing. We are pretty sure it’s from all of the ear infections and fluid in his ears (who really wants to hear music underwater anyways!?). Over the last month he has been obsessed with his tambourine and triangle. He’s even started ‘dancing’ within the last couple weeks, which is quite possibly the cutest thing ever. The second reason why this is a big deal is because he’s actually holding onto something and very precisely hitting another object to make noise. Take that fine motor skills!!

SELF FEEDING WITH SMALL FOODS

I took this video to show how much he LOVES being praised, but he’s getting much better at picking up cheerios and getting them in his mouth.

and now for the BIGGEST thing of all……

JAXSON IS MOBILE!!!!! A few days ago, out of the blue, Jaxson started to pull himself on his belly. At first he would get onto his belly through the splits of course, pull himself once, then sit back up. He would repeat this process until he moved a couple feet forward to grab what he wanted. I took this video 2 days after he first started and he’s doing multiple pulls before sitting. Every day he is getting more proficient and quicker. If we put him on the carpet he actually semi gets on his knees to a more traditional crawling position and uses his legs to push. So now we are on a mission to put a rug in the living room and to of course baby proof the house.

So there you have it folks. That is the first half of our summer in a nutshell. Now that we are back into routine you can expect more regular Down With Jax updates and blog posts 🙂 And because I have a trillion pictures of Jaxson I’ll end this with more summertime pics….. 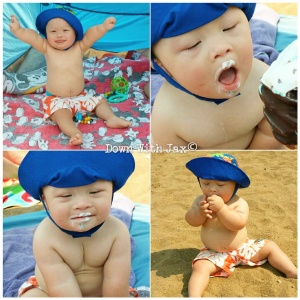 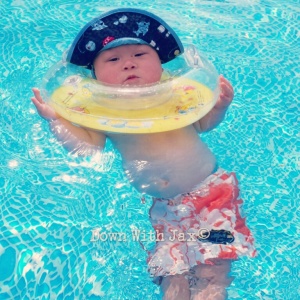