Over the next few months we have A LOT of things to celebrate! The celebrations kicked off a few weeks ago with Jaxson’s adoption being finalized!! We could not be more excited to finally all have the same last name and to legally be his parents 🙂 The coolest part about the finalized adoption is that the adoption order was granted exactly one year to the day that we first walked into the adoption agency to inquire about adoption. Chance, fate, luck, call it whatever you want, but this was all so meant to be ❤

The wait to get the adoption order in the mail is a few weeks from the time the adoption is granted. We waited pretty impatiently for that piece of paper to show up because we kind of need to get a passport in order to go on holidays in 3 weeks. Hahaha, nothing like pushing our luck! All turned out well, and that paper came last week! We spent the day celebrating, and now we wait for his passport

The next celebration on the list is World Down Syndrome Day. This day is celebrated on March 21. 3-21 for obvious reasons: Down syndrome is 3 copies of the 21 chromosome. Unfortunately I have to work on this day so there won’t be too much celebrating for our little family. I am very jealous hearing everyone else’s WDSD plans and will live vicariously through everyone else.

My sorrows of missing out on WDSD will be consoled by the thoughts of the other things we have to celebrate over the next few months.

Lucky guy has A LOT of cakes to consume in his near future. I think he will be up for the task! 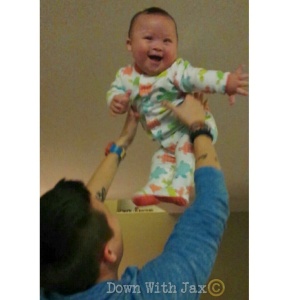 Of course we can’t forget to celebrate his accomplishments, and fun new things he has learned over the last little while.

About a month ago Jaxson figured out how to wave. We were helping him wave for quite some time, and one night out the the blue he just did it himself! At first we thought it was a total fluke, until we waved at him again and said “hi Jaxson” and he did it! Probably the coolest thing ever. Now he does it ALL the time. Whether or not anyone is waving or saying ‘hi’ to him because he wants to be praised. So we wave back, clap our hands and yell “YAY JAXSON!” EVERY SINGLE TIME. He thinks it’s the best thing ever, and so do we ❤

Jaxson has also figured out standing, and has gotten quite stable over the last week.

And the newest accomplishment we’ve been celebrating is drinking from a straw. I am actually quite weirded out at how fast he picked this one up, as it takes kids a while to master this one. He sucked and drank the very first time Alex put the straw in his mouth.

Well I’m all celebrated out just thinking about all of the celebrations! I’m sure I’ll have something to post on WDSD so check back on saturday!

3 thoughts on “So Much To Celebrate, So Little Time”