Day 5 has been a LONG day but a very good one non the less. This morning started out with the removal of more attachments! Today we got rid of his central line, NG tube and NJ tube. Now his face looks like the baby we know!

This morning our hopes of moving to the floor were dashed by a bed shortage upstairs. We were told there is likely no beds opening up today so we had at least one more day in the cardiac PICU (UGH!!). Around 1300 we were told that they need our bed in the cardiac PICU so we would be moved to the regular PICU for the night, which is just as uncomfortable!!! So we moved over there, and of course within being there for 30 minutes a bed opened up for us on the floor!! So we sat and waited and waited some more to get moved. FINALLY by 1830 we were taken upstairs and started to settle in. It was a long day of waiting and not knowing where we would end up.

Jaxson is doing great today. His pacemaker hasn’t had to kick in since last night. Even when he is sleeping hard his heart rate hasn’t dropped below 90 bpm. Which is great! Hopefully if he can sustain that normal heart rate we can ditch the pacemaker wires. His chest tube is still draining chyle, however it has slowed down substantially, and the doctor is convinced a change in his diet for the next bit will do the trick.

Today’s post is called ‘swamp monster’ because Jaxson had a GIANT swamp monster diaper (poop) that almost reached his neck this afternoon. First one since surgery (yay!) So we are happy things in that little Buddah belly are working again. (on a side note we have become those annoying parents that broadcasts our child’s bowel movements…. wow. To our friends: we understand if this means friends off) 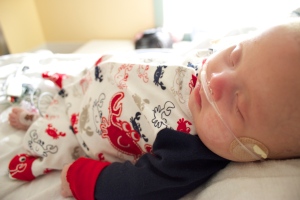 Tonight should be pretty uneventful. He is going back to his 3 hour feeding schedule. I (Holly) will be staying tonight at the hospital, and we plan on alternating nights here.

We just can’t get over how great this little pickle looks! It’s so hard to believe that 5 days ago he had open heart surgery, and he was extubated 3 days ago. It blows my mind how tough these little babies are.

(Look at those chubby cheeks!!!)